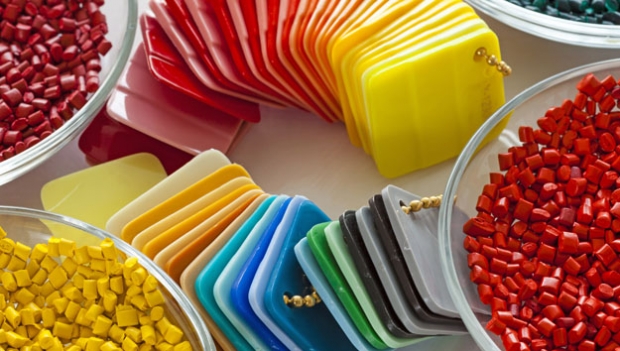 Plastics are the common name for a class of polymers used in manufacturing.  In the world of print, plastics are most used as a substrate – as part of FESPA’s Learning Curve series, we take a look at the most common types of plastic used in print.

Plastics are the common name for a class of polymers.

Most of the plastics used for printing are synthetic and derived from hydrocarbons, i.e. they’re oil based and come from the petrochemical industry. However there are natural polymers too, most notably rubber and cellulose (a primary component of paper and also the basis of cellulose).

Plastic substrates are widely used in both inkjet and screen process printing. There’s a large choice of materials for different applications. Here’s a quick introductory guide to the most common types. We’ve skated over some of the recycling issues, such as biodegradability and de-inking, but we’ll return to that in more detail in a future article.

Applications: A plastic that in sheet form is hard and transparent, used as shatterproof and pressure-resistant alternatives to glass in some vehicles, aircraft and greenhouses. It’s cheaper than polycarbonate but not as strong or scratch-resistant. However, it doesn’t contain the potentially harmful bisphenol-A.

Solvent inks work fine with screen presses, but very few flatbed inkjets print with solvent. UV printing is possible onto acrylic sheets, but adhesion is poor unless a specially coated material is used.

Acrylic fibres are popular for garments and furnishings because they feel soft, like wool. Trade names for the fibre include Acrilan, Dralon and Orlon. These aren’t printed as far as we can tell.

Recyclable: Yes, but only by breakdown and not for re-use.

Applications: Mylar was invented by DuPont and is its trade name for stretched transparent PET film with a thin metallised layer (of various colours) on one side.

It’s used for special effects printing, plus industrial applications such as insulators. Novelty helium filled greetings balloons are often made from Mylar.

Its optical clarity makes it suitable for lenticular lens material too. With a thin metallised backing it’s called Mylar, which is light and heat reflective and can have a mirror finish.

Various other compounds are often added to modify its properties for specific applications. These are known as co-polymers. For instance printable sheet materials are often made from PET-G (Polyethylene terephthalate glycol-modified) where glycol is added to lower the melting temperature. PET-G can also be used for thermoformed applications

Applications: Technically polycarbonate is a collective name for a group of similar plastics, derived in different ways from bisphenol A and phosgene.

In large format printing terms it is usually encountered as a rigid flat sheet used for durable signs and similar displays. This requires a flatbed inkjet or screen press. Most flatbeds inkjets use UV-cured inks, but solvent inks can also be used with polycarbonates.

Apart from flat glass-like applications, polycarbonate variants are also mouldable and can be used to form bottles and similar containers. Due to health worries about leaching of Biphenol A, It is no linger authorised for use in baby feeding bottles by the US FDA or European Food Safety Authority, and the FDA bans it for some other baby and infant products.

Recyclable: Yes, but the resulting material is less strong.

Applications: Polyester is a class of broadly similar materials, including PET and polycarbonates as well as some liquid crystals.

All of them tend to be fairly fire resistant very recyclable. Most have low toxicity, though some forms do have other health implications. Polyethylene and polypropylene are not polyesters.

Polyester it’s sometimes used as a descriptive name in its own right, particularly also used as a spun fibre in woven fabrics, either on its own or mixed with cotton, for garments, wallcoverings, printable canvas media, flags and banners.

Dye sublimation printing works with some polyester fabrics (including polyester-cotton mixes), while non-absorbent materials such as ceramics, glass, wood and metal, are often coated with polyester so they can be used with dye sublimation transfers in a heat press.

Printable by: depends on precise material, but can include dye sublimation, solvent, eco solvent and UV curable.

Applications: Plastic carrier bags and similar, films, containers including bottles. There are many different types, often differentiated by density, so for instance High density polyethylene (HDPE) is commonly used for milk bottles, butter tubs and similar containers as well as woven banner material; while Medium Density polyethylene is used for shrink films, carrier bags, screw tops. They can be combined with other compounds as copolymers, for example to form acrylics.

Polypropylene is used because it is highly solvent resistant and water-repellent, which makes it hard to print on with many inks. Flexible UV inks can work, or self-adhesive labels with suitable adhesives.

For mass production it’s common to use in-mould labels, which are usually pre-printed onto polyester and combine with the liquid PP when it is injected.

Recyclable: Yes, it can be recycled up to 50 times, usually into other plastic items.

Applications: Polystyrene is a widely used plastic, though it’s usually only printed in its packaging application. Polystyrene can be injection moulded (it’s used for plastic model kits and CD cases for instance), or extruded as sheets for vacuum forming of food containers, or foamed into expanded polystyrene for the familiar heat-retaining fast food containers as well as ceiling tiles and packing materials.

Adhesive labels or card sleeves tend to be used for vacformed containers, but direct printing of foam containers is possible with inkjet heads on filling lines.

Applications: This is a thin statically charged form of either PVC or polypropylene that will adhere to many clean, fairly smooth surfaces, including other plastics, glass, metal, wood, cardboard and (sometimes) brick.

It’s very commonly used for window graphics. There are clear, frosted and white films available. As there is no adhesive, removal leaves no residue.

Applications:  Tyvek is a tradename of DuPont, which developed it. It is made from non-woven spun polyethylene fibres, bonded by heat and pressure. It is very lightweight, very strong and highly (Class A) fire resistant.

It is very resistant to tearing, but can easily be cut by blades, even scissors. It can be bonded with some adhesives, sewn and eyeleted, and ultrasonic welded. It resembles paper and can be written on by pens, so it’s often used for mailing envelopes for heavy items.

In large format printing it’s used for flags, banners, soft signage and pop-ups. In 2009 DuPont introduced Tyvek Vivia, a coated version specifically for wide format printing with UV-cure inkjets or screen process. It has no show-through, to allow double-sided printing.

There is a Soft Structure version for clothing, and a smooth bright-white (Brillion) version for labels. Some grades are food certified.

Although waterproof, Tyvek lets air and water vapour through the fibres, so is often used to make disposable coverall clothing.

Recyclable: Yes, but must be separated from paper first. Some Tyvek is marked as recyclable alongside PET plastic bottles.

Recyclable: Yes, usually into other products that don’t need pure white or transparency.